Fireballs: Tools of the Old Days

These were the most common fire glove in use—at least in our area, when I joined the fire department.  I’ve heard a few call them red balls, but they were really more orange than red, a flexible plastic coated material that made them water proof, and if worn with cloth liner gloves, warm in the winter.  The coating was also their worst characteristic, as it could and did melt in fires, and resulted in some nasty burns.  They didn’t smell great or at least your hands didn’t after wearing them for a while.  The sweat build up was absorbed by the inner layer and never went away.  They were in the process of being replaced with heavy lined cowhide gloves that gave better protection from fire, but soaked through quickly—their downside. 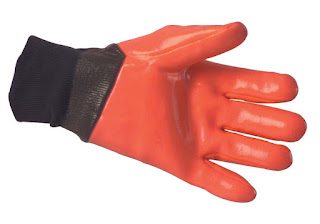 My department resolved this inherent conflict by issuing everyone a pair of each; fireballs and the new leather gloves.  We wore the leathers for the fire attack and the fireballs for cleaning up, rolling and loading hose, and the ever important washing of the rigs when we returned.  I still see a pair around once in a while, inevitably used now only for this last purpose.
Fireballs and three-quarter boots; tools of the old days.
Posted by Gary Ryman at 9:56 AM 0 comments

From the mouths of babes—come Chiefs

Walking in for a visit with a friend of mine, I saw the assistant chief’s buggy outside the building.
“So, you put a white hat back on?” I asked him.  My friend had been the department chief a number of years ago.
“No, I took a captain’s spot.  That’s his,” he said pointing at a young—well young to me—man who he then introduced me to.  My friend then went on to tell me that the young man’s father had been a captain when he had been chief years before and he knew the now assistant chief since he had been quite young.
My friend told how the boy had enjoyed his trips to the fire house, looking at the equipment and asking questions.  One day, when he was about five years old, he noticed my friend’s turn out gear in the back of the chief’s car.
“What’s that for?” He asked.
“Well, when I get to the fire, I put my gear one,” my friend answered.
“Really?  My daddy says you just go to the fire and yell at everybody.”
Posted by Gary Ryman at 9:21 AM 1 comments