Getting ready to sign at the Northeast Pennsylvania Volunteer Fireman's Federation Convention at the Browndale Fire Company next weekend. 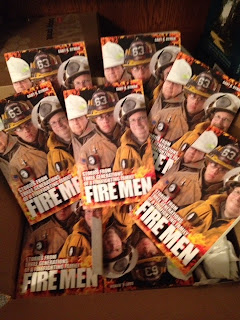 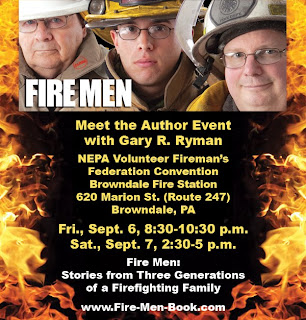 The soda machine in the station is actually loaded with Genesee, Iron City or insert low end beer here.


Four guys get off a piece of apparatus and three of them are related (whether they know it or not).
The portables still have extendable antennas.
The “donations” from filling pools with the tanker are a major source of department income.
The Memorial Day Chicken Barbeque at the station is the social event of the year.
A call comes in at 7:00 AM on the first day of deer season and the only one who moves are the deer.
One of the first line pieces still has coats, boots, and helmets hanging from a rack on the side.
The port-a-pond doubles as the town swimming pool on hot summer days.
Posted by Gary Ryman at 5:08 PM 0 comments

Dilbert and the Fire Department

The cartoon “Dilbert” wouldn’t be so funny if it weren’t so situationally accurate which long ago led me to develop one of “Ryman’s Rules” relating to the strip. This one is not a law of physics, but a sociological paradigm which states that: Morale of any organization is inversely proportional to the number of Dilbert cartoons hanging on the walls.  With that in mind, how many of these comic strip worthy situations have you seen or experienced?


Pulling into a fire scene with an assignment to lay a supply lie and finding the hose bed empty, the line having accidentally laid during the response.  Funny how that never happened when we rode the back step; oh well.
Watching a hose bed turn into silly string when the pump operator charges the wrong line—the one not pulled.
Getting ready to drain the drop tank and finding the drain placed on the uphill side.
Extending the “blue line” with yellow hose and handing it to a new crew who then asks for the “yellow line” to be charged. The reason I hate color coded lines.
Scanning mobile and portable radios—the important information always gets cut off. Enough said.
Pump operators who think “100 pounds is good enough for everything.”
Did you ever notice the same five guys who always have to leave for work the minute it’s time to wash the rigs and hose after a run?
The company responding for RIT that calls out with five and shows up with a driver and four juniors.
The officer, who when in charge of a training night, waits until everyone arrives and then says “so what do you guys want to do tonight?”
Fire Police who drive like Jeff Gordon for some reason assuming it is critical they be the first on scene—in order to direct traffic.
The citizen who on an annual basis, waits for the windiest day of the year to burn trash, resulting in a 5 acre brush fire, and then acts surprised when he gets yelled at.
Looking at the personal vehicles parked during the inevitable call on the afternoon of the first day of buck season and marveling that there is more firepower present than that possessed by the entire local police department. Actually true most any day for rural departments.
The local cop who on an automatic fire alarm offers to shoot the lock off the door instead of waiting for the apparatus or key holder.  His offer was turned down.
The guy with more state class patches on his sleeve than a Sergeant Major has stripes—who won’t go inside.
The guy with the two door subcompact car and a blue light bar so big it extends feet beyond the sides of the car. So big you wonder if the car will rotate when the lights are turned on.
The guy who carries three pagers and two portable radios—all on his belt at the same time. Note: The three above are often the same guy.
The brush fire in a two acre field with only a single solitary tree located right in the center—which the brush truck driver hits while backing up.
You know you’re really in trouble when three pieces of apparatus, all responding to the same call, reach the same intersection; and one turns left, one goes straight, and the third turns right.
Last, but certainly not least, (insert favorite personal activity here) with your significant other is invariably interrupted by the pager.

Fire Archaeology: Still Salvaging After All These Years

The stories of most major fires concentrate on the immediate impact; the deaths and injuries which resulted.  Just over 40 years ago, a fire occurred which caused no deaths or serious injuries, the impact from which is still being felt.  Just after midnight on July 12, 1973, fire broke out on the sixth floor of the National Personnel Records Center in Overland, Missouri.


Construction work on this building to hold military service records was completed in 1956.  When the original studies were conducted during the design phase, conflicting advice was received from archivists and personnel at other government records retention facilities.  Some strongly recommended the inclusion of automatic sprinklers and others argued against.  Not surprisingly, since we are talking about this fire forty years later, the anti-sprinkler forces won.  Storage of paper records in folders and boxes packed on metal shelves and file cabinets filled the building—a massive fire load.


The fire response exceeded 6 alarms.  The interior attack was abandoned at 3:15 AM that morning due to deteriorating conditions, but the exterior attack continued for days.  On the 14th, firefighters re-entered the building to begin final extinguishment and overhaul on the sixth floor; a task complicated by partial structural collapse of the roof.  By the 16th of July, a single company remained on scene. 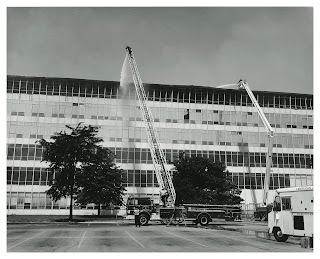 Following fire extinguishment began a salvage operation which continues even today.  Computer tapes and microfilm records were among the early transfers to an off-site facility.  All six floors of the building experienced substantial water damage, and the recovery of water soaked records was a massive operation.  Wet records were re-boxed and the escalator railings used as a slide to move them to the ground floor for transport.  Setting up a temporary facility at the nearby Civilian Personnel Records Center, plastic milk crates, eventually 30,000 of them, were used for open shelf drying, but a better solution was on the horizon.


A vacuum drying chamber was located at the McDonnell Douglas Aircraft plant in St. Louis.  The chamber was originally constructed for space simulation as part of the Apollo moon program.  Once archivists confirmed the technology worked, two additional chambers at the Sandusky, Ohio NASA facility were located and used as well.  Wet records were placed in the plastic milk crates, which were stacked nine high on wood pallets, and the records loaded into the chamber, which was sealed.  Air was evacuated from the chamber and the temperature lowered to freezing.  Hot dry air was then introduced until the wetted materials reach 50 degrees F.  Depending upon how wet the material was, multiple cycles could be needed to dry the records.  With a single chamber capable of holding 2,000 milk crates, nearly eight tons or 2000 gallons of water could be removed during a run.


The charred and burned materials recoverable from the sixth floor created another challenge.  Luckily, this material was not disposed of following the fire, but stored as “B” files, as improvements in technology have made the information from some of these materials usable again.  Today a team of thirty uses the latest restoration techniques to recover information from these documents. Working in latex gloves, this group represents an archival CSI for documents; cleaning mold and debris and utilizing digital technology, scanners, and specialized software, some information from burned sections can be revealed and recovered. 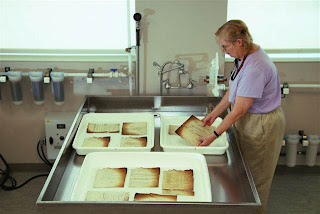 This information remains important.  Requests are received from veteran’s families for information needed to obtain various programmatic government benefits along with on-going work by genealogists and historians.  The meticulous work the recovery team does, like archaeologists unearthing an ancient village filled with information, is critical in helping these servicemen.


Sprinkler protection became an important component for all such government facilities following this fire; a lesson learned like many others, through disaster.  While we will likely never know how many records were lost in the fire, the cause of which remains undetermined, that recovery and restoration continues forty years later is nothing short of miraculous.