Response Challenges...Or What To Do When Your Ladder Truck Catches Fire

A recent story was a great reminder of the never quit attitude of most firefighters, especially truckies. The box alarm had the ladder truck assigned first due on the reported building fire. The response was normal until the cab began filling with smoke. Not a light mist, but nasty, banking down from the ceiling stuff. The driver and officer quickly determined it was emanating from the mobile radio, but the off switch didn’t help. There was no plug to pull as it was hardwired. The response continued. A burning radio wasn’t going to stop them on a first due structure.

The officer rolled down his window, attempting some ventilation with only marginal success. Over the now extra loud screams of the siren, the driver yelled over.

“I’m starting to have a hard time seeing.”

“Well roll your fucking window down,” the officer yelled back. More ventilation couldn’t hurt. The small dash mounted fan was turned on with no effect; this wasn’t to be a PPV fire. The officer began blowing on the radio like a birthday candle, trying to extinguish the fire burning within.

The truck continued, the crew refusing to cancel. Eventually, it went out; whether from the efforts of the truck officer or the circuit protection operating, we don’t know, a knock is a knock. Finally, the smoke began to lift.

A few minutes later, the truck arrived on scene to find a fire on a deck; likely less smoke than they had battled just getting there.

Let a fire in the rig keep you from getting there? Not a true truck company.
Posted by Gary Ryman at 2:11 PM 1 comments

Interior or Exterior, The Debate Continues...

There is a continuing debate on the offensive fire attack, particularly with the spread of lightweight construction. The volume and animosity between sides at times resembles our current political spectrum. One extreme argues that other than in highly limited circumstances, attacks should be initiated and conducted from the exterior until the bulk of the fire is extinguished in order to better ensure firefighter safety. The other extreme advocates interior attacks unless structural collapse has begun or is imminent in order to ensure that a primary search is completed for unknown victims.The safety extreme seems to see the other side as dinosaurs. The interior attack proponents view the safety side as radical (to be kind). This is not an age issue; there are younger and “seasoned,” firefighters as I prefer to refer to them, on both sides.

I’ve looked carefully at the arguments on both sides and after careful consideration, I agree with…..neither.

I’m all for safety in an inherently dangerous job, but a common sense middle ground needs to be struck. The question needs to be asked are conditions tenable in areas of the structure that a live victim could survive. If not, then initiation of the attack from the exterior may be warranted; especially as if conditions are not survivable for people, there is also likely little property to save. Conversely, if the answer is yes, an interior attack and search should be started.

There is a significant flaw in the extreme safety position. In their scenario, they allow for entry for rescue of a known victim. The problem is this: where will the entry teams obtain the experience and more importantly, judgment to understand the interior conditions they will be facing in such a high stress and challenge situation if it is as rare as the perfect diamond. In reality, such a process increases the potential for injury or death because such crews would be inherently inexperienced and lacking in situational awareness and—that word again—judgment; something which they can only attain through repetition.

The flaw on the other side is obvious. If conditions are such that the presence of a survivable victim is not possible, and granted, this too is a judgment call, why take the risk? The argument that such a decision can’t be made accurately is ludicrous.

Are there buildings today we go into which we shouldn’t? Absolutely. Is the reverse true? I’ve frustratingly seen more than a few of these as well.

What I would suggest at this juncture is that the rhetoric on this question be dialed back and that we remember we’re all on the same team with the identical desired outcome. That we are talking about these things is good. However, a little common sense and restraint could go a long way in these debates.
Posted by Gary Ryman at 9:55 AM 0 comments

Turning Back the Clock 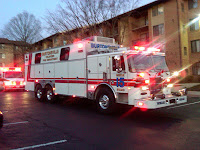 Before Thanksgiving, I had the opportunity to turn the clock back; seeing Michael and doing a ride-along at the station he lives in. It was a marvelous experience; not just to see him again, but the entire visit.
The battalion chief working that day had been a young firefighter at Station 24 when I was a college live-in there, and Mike had mentioned my visit to him. He stopped by the station and we told more than a few stories which seemed to enthrall our small audience, both career and volunteers. The hug we exchanged as he left caught them by surprise. I suspect they saw a little different side of the Chief. 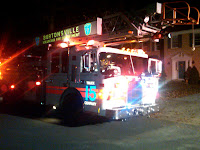 The runs started about 5:00 PM and for the next ninety minutes were non-stop. We never made it back to the building. Another would come in just as we were clearing the previous. These rush hour calls were all medical assists. I rode in the back of the squad, a large walk-in rescue, and Mike had the seat. Recently promoted to Firefighter III on the county integrated command list and with no officers or Master firefighters available to ride as the officer; it put him in the seat.
Later that evening, we took the ladder truck, a 100 ft. rear mount straight stick, down to a local restaurant which was sponsoring a fund raiser for the station. Luckily, but unusually, we were able to finish eating before the next call came in. A box in Prince Georges County was sounded with us as the second due ladder truck. Starting up Route 29, power call yelping, Mike hammered the Q and air horn. The traffic took me back, six and eight cars deep in all lanes at intersections. The Master driving skillfully “encouraged” drivers to move. They scattered like ants, some straight through the light, some left, a few right. Shortly before arrival, command placed all units in service, the source of the smoke at the apartment complex having been located and mitigated.
Back at the station while we were shooting the breeze, the station alert sounded for an adaptive response. More than an investigation but less than a full box, two engines and a truck were dispatched for the odor of smoke. The ladder truck with Mike in the seat again, was first arriving and positioned on Side A while the engine laid out from the closest hydrant. Seconds after I had exited the truck, two ladders were up on the A side of the house and the engine company was beginning to stretch an attack line, the four inch supply line trailing back to the plug. The second due engine from PG came in and stood by the hydrant. It was wonderful to watch; poetry in motion. It wasn’t anything special, but it was fabulous to watch the basics perfectly executed with no conversation or orders. With only a burned up electrical socket to deal with, we were back in service in just a short time.
Our last run of the night was about 1:00 AM; a nice night for the truck crew. That doesn’t mean I slept. Unfamiliar with the station alerts, I woke up for every engine, ambulance, and medic run the balance of the night, of which there were several.
It was a great visit and one I hope to repeat in the spring……with a hotel room waiting for me to sleep in.
Posted by Gary Ryman at 2:36 PM 1 comments