Oh Where Oh Where Should My Red Light Be...

Warning lights in the 1960s weren’t the high efficiency LED’s or strobes we see today.  A single bulb “Vitalite” was the norm.  Back then, West Corners had a whopping two traffic lights, both of which were relatively new.  Heavy traffic for emergency responders was not a major problem.


Mom was not a fan of lights on the roof of cars.  She felt they detracted from the looks.  Further, she didn’t even like them on the front dash, arguing they obstructed her vision.
None of this was much of an issue when Dad was a firefighter, lieutenant, or captain.  We lived less than a mile from the station; one stop sign and two turns away.  When he made Assistant Chief and had to start responding to the scene, things changed. 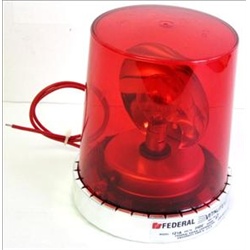 A mobile radio—with tubes—was installed in the car.  A miniature manual siren was bolted under the hood.  Neither of these was a problem; it was the red light that was in dispute.   Locating it on the roof was out of the question and her objections regarding the front dash were continued.  The light ended up on the rear deck in the back window of the old Dodge.
This location was one step above useless.  When parked at a scene, it could be useful, but did little to expedite actually getting there.
All this changed one fortuitous day when Mom and I happened to be in the car with Dad when a fire call was received.  Dad called out as responding and activated the light on the rear deck and the dinky siren, and attempted to weave his way through what passed as traffic in our little town.   In the front seat, Mom was astounded at the difficulty he experienced.
“Why won’t these people pull over?” She asked, incredulous over this lack of cooperation, her hands braced o the dash board against the bobbing and weaving of the car.
“Because nobody can see the damn light,” Dad said.  Mom knew better than to continue the conversation while we were enroute to the call.  Meanwhile, I was having a blast in the back seat; seeing the flashes of red bounce in and out of the car and looking for smoke in the sky in front of us.
Mom and I watched from the car while the incident, nothing serious if memory serves, was handled.  When the fire apparatus was repacked and returning to the station, Dad got back in the car.  Mom had apparently been giving some thought to the ride we took to the scene and her previous position on the location of the red light in the car.  Before Dad had barely settled in to start the ignition, she revealed her decision.
“Rich, put the damn light wherever you want it.”
Dad didn’t say anything, but before the day was out, the center of the roof was graced with the old single bulb red light.
Posted by Gary Ryman at 2:47 PM 0 comments

The engine company pulls up in front of the single story house, the siren winding down.  Grey black smoke oozes from previously unknown cracks and windows, doors, and the building eaves.  The firefighter in the rear dismounts and reaches for the nozzle and hose stacked in the horizontal bed or cross lay and pulls it onto his shoulder.  The officer, axe and halligan bar, the “irons” in his hand, pulls the hose from the second stack as the firefighter advances toward the front door.  The driver comes around the engine and relieves the officer at this so he can follow the firefighter.


At the front door, the officer wrenches open the screen, disabling it so it won’t close on them while the firefighter flakes out the remaining hose from his shoulder to ensure smooth entry to the building without kinks or catches.  Dropping the nozzle, he takes the axe from the officer who jams the pry end of the halligan into the wood frame by the lock in the door.  With one good whack, the door pops open and smoke pours from around it.


Pulling the door shut again, the officer and firefighter drop to their knees and drop their helmets to the ground, putting on breathing apparatus face pieces and protective hoods in a well-practiced motion.  Hood, helmet, and gloves in place, the firefighter picks up the nozzle, the hose now hard with water, and pushes the fractured front door open again.  With a well-trained crew, the process takes place without the exchange of a word; poetry in motion.


The firefighter and officer enter the blackness of the house, their eyes widening to the physical limits, attempting to see the fire.  Their senses go into overdrive, adrenaline having a romp through their bodies.  Both listen for the crackling of flames and feeling heat through their protective clothing, trying to discern the direction from which it emanates.  Windows shatter as fellow arriving firefighters begin to ventilate the building, hoping to allow heat and smoke to escape; making conditions better for the attack crew—and any victims who might remain.


A few feet further in, the nozzleman spies a glow in front of him through the viscous smoke; just a fleeting glance, but it gives him a direction to head.


“It’s straight ahead,” he yells, his voice muffled by the face piece along with the hissing of the inhalation and exhalation from his and the officer’s mask.  Their conversations are now short, but more frequent, punctuated by expletives.  They drag and pull the hose another yard or so to the kitchen doorway where the fire is now more visible, starting to roll over their heads into the living room.  This is not the made for television fire with the perfect visibility of gas jets (sorry Chicago Fire).  Here the flames remain muted by the smoke, the heat pushing the attack team into the floor.


The firefighter opens the nozzle, directing the fist thick straight stream of water at the ceiling, whipping it in circles.  The water makes a staccato thumping bass drum against the plaster, but without rhythm. .  The firefighter and officer push into the room and the angle of the hose stream drops as the nozzleman hits flames at cabinet level throughout the room.  Visibility, if anything, is worse as the water converts the fire to steam and the heat and smoke and ceiling level drop, the plume inverted by the water application.  Other firefighters spread into the house, searching for victims or the spread of the fire beyond the kitchen.


The bulk of the fire now out in the kitchen, another firefighter with a pike pole, a long stick with a hook at the end, pushes past the nozzleman and thrusts the pike into the ceiling.  Pulling down the plaster, the space above, and any remaining fire, is visible for the nozzleman to hit with his stream.  The smoke and heat begin to lift, exiting through the broken kitchen windows, leaving a smother wet jungle in the room.  A few more minutes of work and it becomes clear the bulk of the fire is out.


The firefighter and officer are relieved by others and head outside for a break.  Kneeling again on the front lawn, they remove their helmets and face pieces and open their bunker coats.  In the cool fall air, steam rises from their uncovered heads and bodies, condensing from the sweat.


They smile and converse about this easy fire as the adrenaline surging through their systems begins to recede.  A satisfaction is left having completed what they regularly trained for, going against the beast or the “Red Devil” as it is sometimes described.  It’s an untenable environment after just a few minutes without the right equipment and one that few want to visit much less work in.  That increases the satisfaction; doing something only a small percentage of people can do, going “inside.” 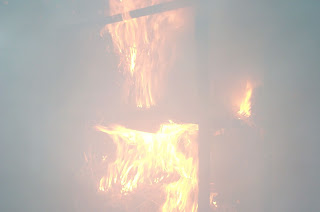 Looking Forward to an Upcoming Event 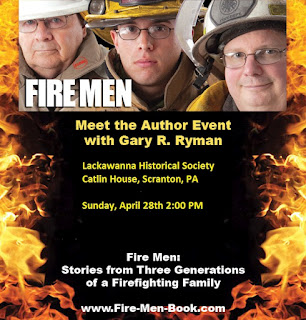 An excerpt from Fire Men recently was posted and is available here.  Fire Men excerpt  Take a look.

You can also check out my interview about the book here. Interview
Posted by Gary Ryman at 7:21 AM 0 comments