I'll be signing copies of my new novel Mayday! Firefighter Down as well as  Fire Men: Stories From Three Generations of a Firefighting Family with Chief Dennis Rubin, formerly of DCFD, at The Tavern at Fire Station 1 on Georgia Avenue in Silver Spring. Hoping for a great turn out. 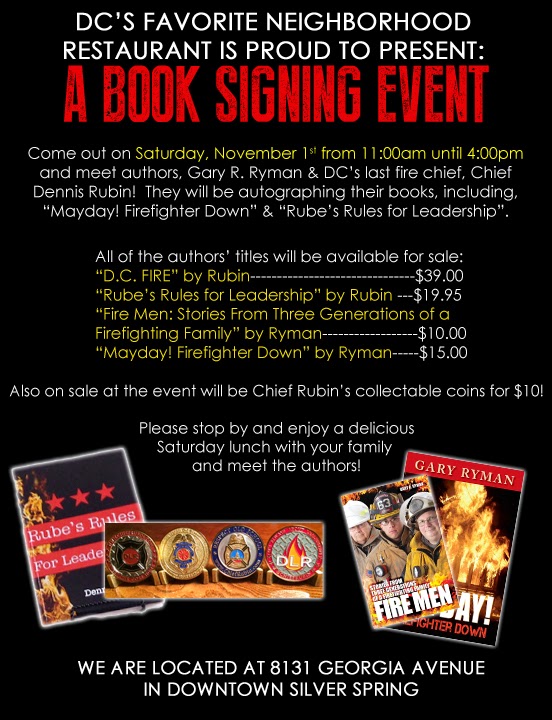 From the Archives....In Honor of Chief Russ Gow

This weekend, an old friend will be among those honored at the National Fallen Firefighters Memorial at the National Fire Academy in Emmitsburg, MD.  It is a good time to resurrect this piece from the week he died......RIP Russell

An old friend passed away this week, doing what he loved most, running a pump.  While I never understood why, the story of how we met originally was one of his favorites, one which I heard him tell innumerable people.  So, here it is again….from the archives. 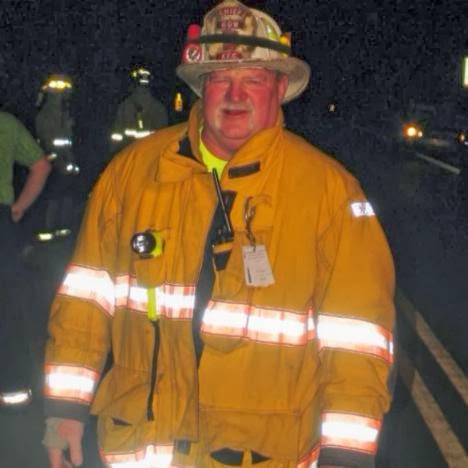 The Kinder, Gentler Fire House
By S.J. Kelley
Let’s  take a trip  back in time to the 1980’s; open cab apparatus, ¾ Boots and long coats. During work parties the men had a beer in the hand and the back of the firehouse was filled with pipe smoke. The Fire house was the social club in town. It was not a surprise to find firemen at the station twice a week hanging out. The training requirements were very scarce and if you were socially popular you were an officer. They were not afraid to express their opinions. As national standard training requirements started coming to light in the late 80’s going into the 90’s the firehouse started to evolve into a business rather than a social club. .  There were personality conflicts over the changing dynamics.  People realized “ I do not need this BS and it is like having a second job “and that was the start of the decline of the fire house.
I truly believe that 9/11 changed the outlook on the firehouse. Our priorities changed to Family come first. It started to become the ‘kinder, gentler fire house. It was okay to miss calls if you had family plans or the new excuse “well I have to work in the morning”. We started losing that dedication. Heading off to work with no sleep after fighting a fire all night was no longer a source of price.  Do not get me wrong I believe in the family comes first. But we are starting these roles now with the new generation of firefighters. They are not starting from the traditional probie fireman.

A transitional battle of today is the lack of members. We are not getting the high number of firefighters to calls like we use to. Local economies have tanked and jobs have been pushed away. Your only guarantee of a daytime firefighter is if they work for the town government.  New members, when we can find them, are walked in on a red carpet, and welcomed with open arms.  In many ways we go out of our way and create this ‘kinder, gentler’ fire house. By doing this I truly feel that we are doing a disservice for f these new members to prove themselves and the bar is set low. Now I have seen exceptions to this theory but it is rare and harder to find men and women who have heart for the job.  We are so relaxed and afraid to offend someone that we do not properly discipline when they make a mistake. I am not talking suspending someone or embarrassing the individual. But there are times we have to keep order and it is a business we are running.

Another battle of today is our youth. The newest generation is use to communicating via a cell phone or having no hands on experience. Our biggest challenge is training these kids and getting through to them. The biggest question is having a kinder and gentler environment or being tough like a drill sergeant? Remember as an -officer we have to train these firefighter for the worst and be battle ready.  The best solution for the Junior Firefighters and younger members is to set the bar. ” This is what we expect out of you!”  Each training evolution or even the start of a course set the ground rules and follow through if they do not comply.

I’m not advocating turning new membership into Marine Corps boot camp, but expectations have to be set.   The unfortunately common refrain of “I don’t have to do that, I’m a volunteer,” needs to disappear from our collective vocabularies.  THERE ARE TWO THINGS ABOUT THE VOLUNTEER FIRE DEPARTMENT:  JOINING AND QUITTING.  Beyond that, the rules and procedures established need to be followed.  Anything less, and people—firefighters and civilians—can get hurt, or worse.

We need to build our new members up, creating a level of pride in their accomplishments.  Think about any group or organization in which the members bond with pride and there is a common denominator; training.  Training in which they work hard and stretch to reach goals.

Let’s work together to raise the bar.  Does the public we are entrusted with protecting deserve any less?