The opening day of deer season being upon us reminded me of some experiences with out-of-town hunters. At the far end of our district, near the interstate, we had would could be generously called a “gentleman’s club.” Strip joint was the common parlance. It was a well known establishment to most of our members. Jack, the guy who owned it, typically took good care of us.

We didn’t run too many calls there. Jack ran a pretty tight ship, and trouble didn’t get real far out of hand. The worst time of year, surprisingly, was hunting season.

Jersey hunters as we called them would come into town, hunting primarily state game lands; staying in nearby motels. They could be from anywhere, not necessarily New Jersey, but any non local hunter was tagged with the sobriquet. At night, they needed entertainment, hence their visits to our well known establishment.

Once they had a few beers in them, opinions would start to fly which would occasionally offend their Pennsylvania brethren. Attitude adjustment would ensue.

Following this, our ambulance would be needed for a ride to a local emergency room. On arrival, we would typically find the offending hunter lying in the parking lot in front of the building. They would intone on how they had been assaulted or had other criminal acts committed upon their person. We would enlighten them.

“You fell down the front steps,” we would explain to them. They would disagree, and we would repeat the explanation.

“If you had kept your mouth shut, you wouldn’t have fallen down the front steps,” we would explain. Eventually they would give up, or at least decide it wasn’t worth the argument.

It was always fun to see the grins on the Pennsylvania hunters as we explained the malady that caused the injury to the out-of-town boys.
Posted by Gary Ryman at 12:03 PM 0 comments

If We Bought Our Personal Cars Like We Buy Fire Apparatus...

I have mentioned previously the excessive interlocks and safeties increasing the now astronomical cost of fire apparatus. This, however, is only part of the problem. In the other portion, we are our own worst enemy.

A military term for it is gold plating. Disingenuously, we call it meeting our needs. Custom hose bed arrangements, specialized compartments, light packages rivaling the Radio City Christmas tree, and that is before we get to pumps and tanks. “Custom” engines costing in the $400,000 range are unsustainable for all but a very few departments.

This picture makes me think about what it would be like if we purchased our personal cars using the same methods we use for fire apparatus. The typical sedan, SUV, or pick-up has three levels; a basic, intermediate, and luxury level. Each step up seems to add a half dozen options, but it’s not an ala carte menu. As bad as new car costs are, I can see what would happen…..

Chief B enters the local Ford dealership.
“I’d like to spec out one of those new Taurus’s you have,” the Chief says.

“Great Chief, step right over to my desk.”

“I like your base model, but I need a special trunk, as I only load my suitcases one way.”

“Also, I need four head lights instead of two, and these special brake lights. The hazard flashers will have to be moved because of the special trunk.”

“The sun roof needs to double in size. I like lots of upward visibility.”

“That will entail special reinforcement and a re-design of the roof, but I’m sure our engineers are up to the challenge.”

“Great, then I’m sure the fifty gallon windshield washer reservoir won’t be a problem for them.”

“Okay, then, how much do you think my new Taurus will run?”

The Chairman of the Board of the township supervisors lived down the street from me. While I always suspected, I never asked him if he was happy when I took my white helmet off. His sleep likely improved.

I suspect this because of a little habit I developed following his election as supervisor. While he was always supportive of the fire department, he didn’t really understand a lot of what was involved, particularly the time commitment. I therefore developed a method by which to increase his understanding in this area; perhaps one which was a bit unorthodox.

There is typically not much traffic out here in the country, particularly in the middle of the night. Directly in front of his house, however, it was the Capital Belt way at rush hour. If I had to get out of bed, I thought he should know, and be aware that we were up protecting the fine citizens of the township. As I approached his house, regardless of the time and actual traffic, the siren would be switched on to yelp, and as I passed, back off, clearing that magical traffic that always seemed to be present in front of his home.

Yes, I suspect he noticed a difference in his sleep habits when I got out a year or so before he did. Maybe someday I’ll ask him.
Posted by Gary Ryman at 6:17 PM 0 comments

One of our home security writers had the opportunity to chat with Gary Ryman, a lifelong firefighter and author of Fire Men: Stories From Three Generations of a Firefighting Family. Ryman began his career as an EMS at 16-years-old. After two years, he transitioned into the fire department and has been fighting fires ever since. As part of October’s fire safety ﻿﻿﻿﻿initiative we asked Ryman to share his best fire safety tips with us. 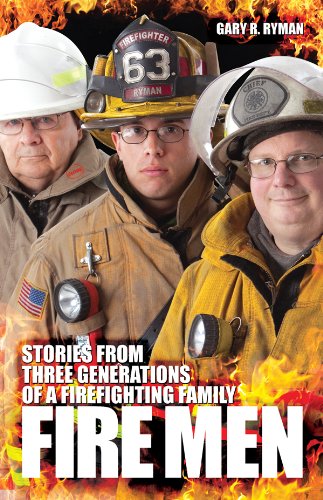 This fast-paced memoir reads like a novel. Gary Ryman draws in his readers with storytelling that is as captivating as a five-alarm blaze. His attention to historical facts and details makes you feel like a member of his family and his company. There were moments of fist-clenching tension countered by misty-eyed sadness and heart-warming anecdotes. I not only learned something from Fire Men: Stories from Three Generations of a Firefighting Family, I felt something, too.

http://www.fire-men-book.com
Posted by Tribute Books at 10:56 AM 0 comments

One of the first brush fires Mike went on when he was a fourteen year old cadet held an interesting surprise. The fire was just over the line in Greenfield, but both companies were working it. I was not—following my personal rule against Indian tanks based on “Ryman’s Law,” my contribution to the world of physics, which states that water weight in an Indian tank increases one pound per gallon for ever year over forty. Observing and functioning as a quasi safety officer—mainly for my son, was perfectly fine by me.

Mike had donned his Indian tank and was working the perimeter, mindful of my admonitions to stay in the black as he knocked down flames at the head of the fire. Concentrating on the fire, he didn’t see an unusual visitor until feeling something unusual at boot level. He looked down to see a copperhead crawl over the toe and ankle of one of his rubber bunker boots and continue slithering away. A few squirts from the Indian tank encouraged the snake to continue and perhaps expedite its journey elsewhere, location unknown, as Mike certainly didn’t go looking for him. It was certainly an interesting way for him to learn that fires are always full or surprises.
Posted by Gary Ryman at 8:57 AM 0 comments